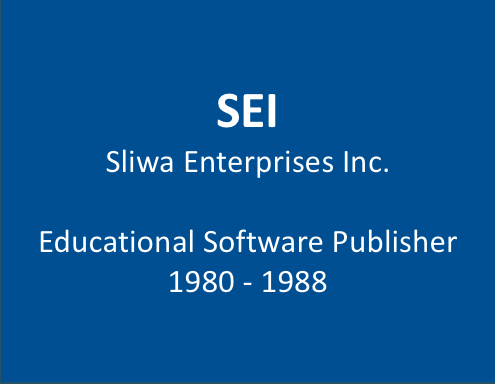 I founded SEI (Sliwa Enterprises Inc.) in 1978.  Basically the Apple II had just come out and I bought one.  As I recall it was about $2200.  I had to scrimp to get it on my NASA salary and adapted a TV to be the monitor (my old trusty one I bought when I was a paper-boy).  It originally had cassette tapes for storage so I was glad when they add a floppy disk drive that could hold 64KB worth of memory.  These ultimately got to 128K and then kept climbing.  We really didn’t get hard drives until the mid-80’s.  The first ones were really bigger than the computer but could hold 5MB!

I started writing simple little programs and bought some software and tools to assist.  One of my buddies, Brad Schrick, and I used to joke at the market at that time.  We marveled at a chess program written in assembler that was amazingly good.  We watched a customer spend a half-hour analyzing it and we were amazed for the time:  good graphics, multiple levels, suggesting moves, multiple openings, coaching for end games, etc. (circa 1980).  But the program was $15 and the potential customer said that at that price he would write his own.  We were just shocked.  Even so I decided to launch a software business as an adjunct to my work at NASA.

I had starting writing programs for practicing college board exams.  I was about to take the GRE and had enjoyed gearing up and studying for the SAT a few years before.  I had some study resources and thought there had to be a better way. So I wrote some drill and practice programs for building verbal skills for the SAT and tried to market them. I started getting a little money so I increased my gain.

Sections to be written include:

First Catalog – 1984 – Too elegant and expensive with little content – but a great start.