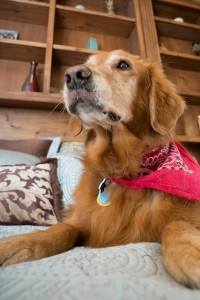 Our beloved Golden Retriever, Angel, passed away last week.  She was coming up on 13 years old, but cancer shortened here life.  She was playing ball and frolicking aggressively until this past May when she was diagnosed.  She put on a valiant battle through all of the various doctor appointments and meds.   She tried to maintain her composure and need to comfort her family through the worst of it.  We just wanted to comfort her.

She was the “pick of the litter” of 10 puppies in January 2003.  It was so hard to chose, that 12 week old Pixie was put into the pen with the pups and it wasn’t long before Angel and Pixie had picked each other out.  She was playful, eager to please, and engaging with people.  She came to work with me nearly every day until about 2006 and then several times a week thereafter.  In the early days of the Insitu garage we would just open the door to let Angel and Pixie wander around Bingen Point.  They would come back every 30 minutes to check on us.  Many of the early employees remember Angel and Pixie joining them in meetings.

She loved swimming in the Columbia River and although she was pretty good at frisbee, she really enjoy fetching balls.  Ultimately her favorites were wobbly balls that would challengingly bounce in all directions.  I figured it provoked her genes for chasing squirrels or rabbits.  Her goal was to corral each ball in one or two bounces.  If at a dog park, she would parade around with her captured ‘prey’ for praise and then bring it back to me and lay at my feet ready to go again.  Even when she was 12 years old others would remark at her stamina and the gusto with which she applied her energies.

Around the house she was well-behaved and would almost always be with her sister, Pixie.  Our cat, now 20, was particularly enamored with Angel and would frequently try to snuggle up with the sleeping retriever and start purring.

She was an awesome trail dog and would always naturally stay near us.  If someone stumbled or started to lag she would instinctively investigate.  Of course, she was always hopeful that there would be a stream to explore, wade, swim or drink in.  And, on the trail, she was always on the look-out for squirrels.  She took it upon herself to make sure that none would attack the hiking party.  I can attest that we felt safe from squirrels when she was around.  🙂

Angel loved her time at the dog park.  She mostly just wanted to play ball and occasionally visit others to show her ball (not share) and then bring to me.  She wanted to get her ball first, but she never contested other dogs if they also chased it.  She didn’t want to fight over it.  She frequently would share her ball with puppies after she caught it to let them bring it back.

When younger she was constantly being harassed by ‘randy’ male dogs.  We figured that was the ‘super-model’ appeal she had.  But as she got older she was less tolerant.  Ultimately she turned the tables many a time and pursued, tackled, and held accountable any young males that harassed the ‘retired super-model.’  Several times she held down dogs until they whimpered.  She let them up and then went back to playing ball totally unaffected.  It didn’t take long for the dogs in the dog park to learn that she wasn’t to be trifled with.

Like all retrievers she developed certain habit patterns.  Now that a few days have passed we find ourselves missing those habits or her attention, her need to wag her tail, and her searching eyes wondering what she could do to make us happy.  After all, that was her task on earth.  She did an awesome job right to the end.

Even though at the end she was nearly totally blind and having difficulty walking, I tried to take her down each day to the Bingen Point unofficial dog park.  She could tell she was there and would get extremely happy.  I’d give her the ball and she’d bring it to me.  I’d toss it a few feet and she would try to sniff it out for me.

Just two days before the end, she dragged me down the little cliff path to the Columbia River.  I took off her collar and she waded into the river and went swimming.  She did figure-8’s and swam back and forth about 20 feet from shore.  I am sure that floating and gliding in the river was much better than trying to walk on earth being pulled relentlessly down by gravity. Occasionally, she’d stop and listen for me. I’d encourage her to keep playing.  Finally after about 15 minutes I clapped my hands continuously to provide a homing beacon for the blind dog.  She paddled ashore and walked toward me with such a serene look.  I figured that she thought she had “died and gone to heaven.”

Well now there is another Angel in heaven and we will miss her.  We hope that she is swimming, chasing balls, and taking care of those in need.

Here is a link to a photo album on the life and times of Angel:  link

Here is a subset of photos for this blog posting: 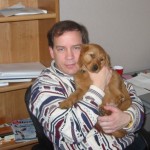 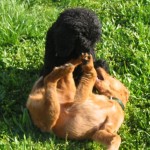 This time Pixie is winning the wrestling match. 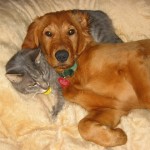 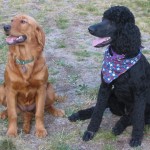 They loved traveling in the Forester. 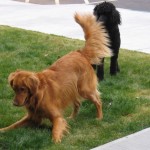 Angel is playing with a puppy. 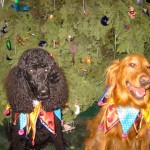 Dressing up for 2006 Christmas. 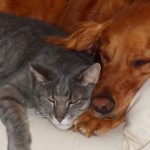 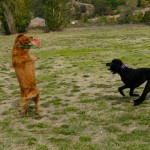 Angel beats Pixie to the frisbee. 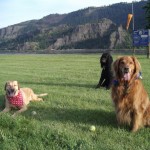 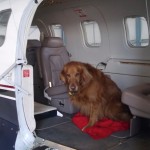 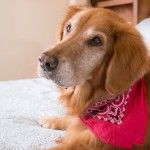 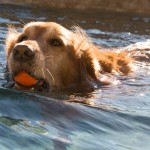 Balls and swimming at 12. 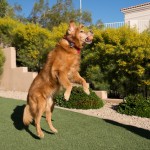 Even at 12 Angel can acrobatically catch balls. 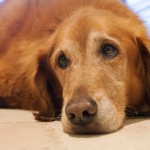 Angel is diagnosed with late stage cancer in May 2015. 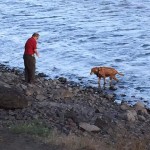 Going for her last swim. Blind she aims for clapping hands.