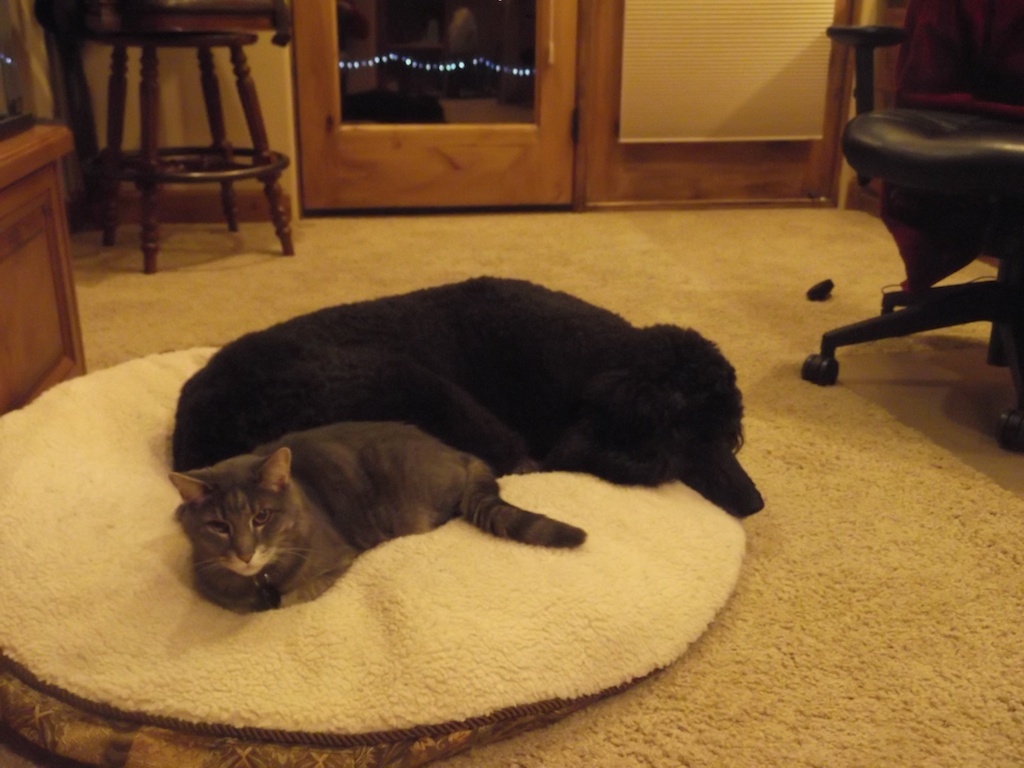 A couple of days before Christmas Pixie seemed a little bit more lame than normal.  Then about midnight starting the 24th her leg started to swell.  I woke up Nancy and we decided to head for the pet hospital/emergency room.

When we got there we were caught in the usual corundum of trying to diagnose a pet that can’t tell you what is bothering them and how they got that way.  The leg was swelling without stop just below the ankle.  They were thinking break, sprain, sting, bone cancer, and possibly valley fever.  Unfortunately, this is her bad leg, the one with steel plate/bolts to reinforce the bone and a fishing line for a tendon replacement.  So complications are likely.

They shaved her leg and didn’t spot any stings.  X-rays, however, showed bone deterioration on both sides of the joint.  Cancer usually doesn’t go across the joint, so valley fever was the suspect.

We got her home after a day and had some pretty intensive care issues.  Then her skin on the bad leg ‘broke’ and a big patch came off.

After about a week of heavy meds, lots of care, and a some good luck she turned the corner, started to eat and poop normally, wanted to go to the dog park and was normal, except for the exposed wound on her leg.  Now that is finally starting to mend as well.

In the meantime, she tested positive for Valley Fever.  It takes a couple of days to test and she came back 8:1 titer. (moderate)  Valley Fever is a fungus spread by airborne spores that is the  earth in the southwest.  It afflicts people and pets but is not believed to be communicable.  However, if there are any discharges it’s best to destroy/clean bedding and bandages before they dry and turn into spores.

People and dogs who are diagnosed with Valley Fever can have the symptoms for months and generally take heavy doses of anti-fungal medicine for at least 12 months.  Pixie will be on anti-fungals for the rest of her life.

A good resource for Valley Fever is the Valley Fever Center of Excellence at the University of Arizona. It usually starts as a respiratory ailment and then can spread to the joints and other parts of the body.  It’s not very nice.  It has lots of auxiliary symptoms similar to lyme disease, making it tough to diagnose.  At least  if the test comes back positive, you got it.  Unfortunately, a negative test is not absolute proof you don’t have it (probably in some early stage).

We just got test results back on Angel and she tested positive with a 32:1 titer (strong).  Generally if dogs have respiratory issues and start to get lame, get it tested.  Some animals that pass through the southwest can get it and some vets suspect bone cancer and start amputating limbs.  Ouch!  Always test for Valley Fever if the dog has spent any time in the southwest and there are unexplained issues.

Pixie was slightly more lame over the past weeks/months, but it was her bad leg, so we chalked it up to old age arthritis on her traumatized leg.  We now believe she was bitten by a spider (or scorpion) which caused the skin ailment and extreme swelling.  Fortunately we uncovered the valley fever before it got too widespread.  Angel has only be slightly more lame, but we thought that was old age (she’s 10) as well.  Perhaps it’s the valley fever that has caused her to be less willing to do the stairs and etc.

We will now test Casper and Nancy. 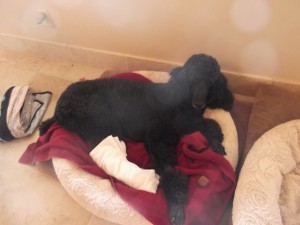 Pixie is drugged and in pain. She doesn't even notice her favorite treat laying on the pillow next to her. 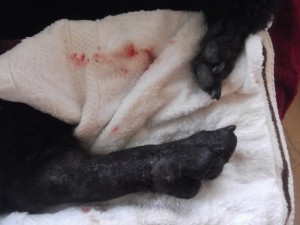 It's hard to tell but the swelling is extreme. 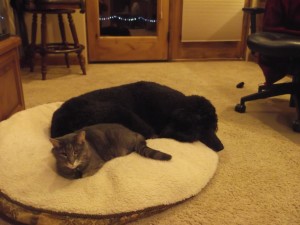 Casper wants to comfort Pixie and help her protect that leg. 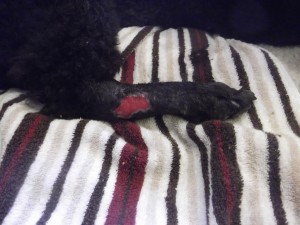 It's finally starting to heal, but this is the open wound that we believe resulted from the bite/sting.