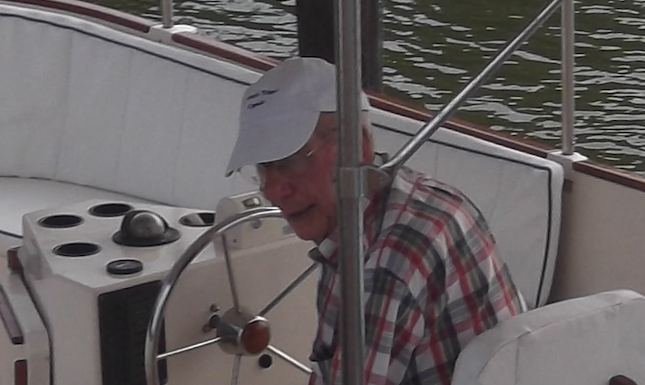 David moved with his family from Rye, NY, to Easton, MD in 1937. He was a member of the first graduating class from the Country School (then known as The Calvert School). After graduating from the Choate School in 1944, he attended Princeton University where he earned his Bachelor’s Degree in 1948 and his Master’s Degree in 1949. Joining the faculty of the Princeton Aeronautical Engineering Department as an instructor, he was appointed to Professor in 1963. David retired as Professor Emeritus in 1982 after 33 years of teaching.

Pursuing a second career, he served as the Executive Director of the Commission on Engineering and Technology at the National Research Council from 1980-1985.

In 1992, he came out of retirement to teach at Embry Riddle Aeronautical University in Daytona Beach, FL, serving as Chairman of the Aerospace Department and Dean of Graduate Studies. In 1995, he retired for the third, and final time.

During his tenure at Princeton, he served as the University’s representative to the Kanpur Indo-American Program (1963-1972) and helped establish the Aeronautical Engineering Department at the Indian Institute of Technology/Kanpur (1964). As a result of his successful efforts in India, he chaired Princeton’s interests in Asia and was actively engaged in similar programs in the Middle East. He assisted in the development of the Engineering School at the University of Jordan. He served on the Boards of Trustees of Robert College of Istanbul, Turkey, the College of Petroleum and Minerals of Dhahran, Saudi Arabia and the Sterling School in Vermont.

In 1977, David was awarded the Distinguished Civilian Service Award by the Navy for contributions made as Chairman of the Naval Research Advisory Committee and a Certificate of Commendation by the Marine Corps. He served the U.S. Navy in research and consultant capacities for over 40 years.

He married his neighbor and fellow Country School classmate, Mary Ann Shipherd in 1948, and moved to Princeton, NJ, where they raised their three children: George, Thomas, and Anne. They lived there until 1982, when they moved to the Washington, DC area for his position with the National Research Council. While still in DC, they built their retirement home, Doshaih (Dickerson’s Old Sailor’s Home and Ice House) on Trippe Creek across from their respective childhood homes. David and Mary Ann moved to Doshaih in Oxford when he retired from the National Research Council. In 2014, David and Mary Ann moved to Londonderry.

David was an avid reader and history buff, preferring biographies and histories over novels. As an amateur historian, he delighted in researching and writing three local histories: The Holy Trinity Church, The First 150 Years (1851-2001), A Talbot Treasure, The Chesapeake Bay Yacht Club (1885-2010) and The Londonderry Air (1989- 2015). A member of the Chesapeake Bay Yacht Club he served as their Historian and Archivist for seven years. He served on the vestries of both Holy Trinity Episcopal Church in Oxford and St. Paul’s in Trappe. For many years, he enjoyed serving as a volunteer in both the Oxford Museum and the Oxford Library. He served on the Board of the Maritime Museum for 15 years.

David and Mary Ann were enthusiastic sailors, having spent their youths on the local creeks and Chesapeake Bay. With the purchase of a Dickerson 35′ in 1969 they resumed their passion for sailing and spent many long weekends on the bay with family and friends. They were members of the Dickerson Association, and he had the honor of serving as Commodore five times.

David traveled extensively around the world for work and pleasure, including whirlwind tours of Europe and Asia while going to and coming from their year of residence in India (1963-1964). Other destinations included Bermuda, Alaska, Panama Canal, French Canal Barge trips, Northern Europe, the Caribbean, the intercoastal waterway, and Nova Scotia. When not traveling or sailing, he was an avid gardener, raising a large variety of fruits and vegetables.

A memorial service will be held at The Church of the Holy Trinity in Oxford, MD, on Saturday, May 18 at 11 a.m. followed by a reception in the Parish Hall.