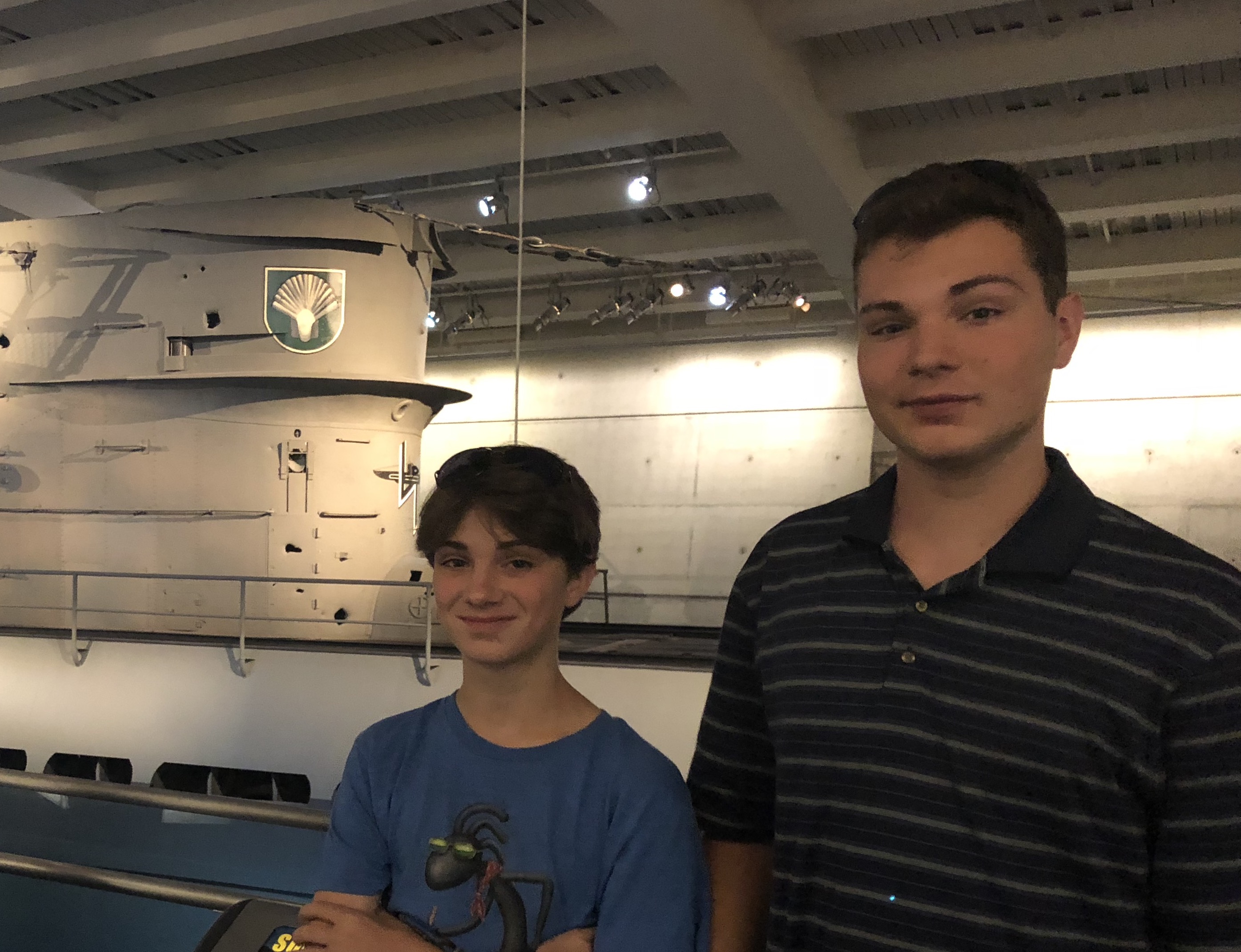 Brady and Ethan Graham came to spend a week with us.  This was actually their third Sliwa Summer Camp session.  Their folks planned to use the time to vacation together and search out possible new environs for a future home.  I decided to make a visit to Chicago as the centerpiece of their time with us.  Here is the journal of their time with us.

I flew Nancy’s Cirrus to Bend and picked up the boys.  A major concern was that the outside temperature was in the 90’s and the airplane was hot.  Hot airplanes are notoriously hard to start.  But we got it going.  Once airborne, I had Ethan serve as autopilot.  I commanded the flight director and Ethan followed the flight director’s commands quite well.

This was our down day prior to the Chicago trip. We made reservations for our visit to the Museum of Science and Industry in terms of the special exhibits and movies we would watch.  We decided to make them for Wednesday, because we were notified that our flight was at risk due to expected thunderstorms.

We decided to head to the movies and caught “Antman & the Wasp” at the movie theater in Hood River.  Then we came back and picked up the dogs to spend some time at the dog park.  Our plan was to pick-up the pizzas ordered by Nancy and bring them home to watch a movie.  Unfortunately, the pizza shop mangled the pizza order.  Nancy called them back and made them deliver a replacement.

The movie we watch was the Black Panther.  Brady didn’t make it to the end.

The boys got up on schedule and we departed for the airport around 9AM.  We had been notified that the flight was going to be late.  We managed to get all three of us through the TSA-Pre line, which made the flight easy to make.  We had time to stop for a few minutes at the United Club.  We arrived at ORD about an hour later than schedule.  Our plan was to catch the blue line into town.  Unfortunately, when we got there, the train was closed.  So we trekked back to ground transportation and caught at $60 taxi ride to the hotel.  We were staying at the Embassy Suites Downtown – Magnificent Mile (link).

We decided to just go across the street and grab a dinner at Whole Foods.  We each loaded up a bowl of food from their salad/hot food bar and just ate their.  We went back to the room and watched the end of “Honey, I Shrunk the Kids” and “How to Train Your Dragon” on the TV.

We got up on time and got to breakfast by 7:30AM.  Embassy Suites breakfasts tend to be excellent and we settled into a routine we would use for the next several days while in Chicago.

We hiked down Columbus toward the Museum Campus area.  It was a bit tricky finding the right sidewalks, but it all worked out well.  We arrived at the Field Museum just after it opened.  The main exhibits we visited were the Mummies, Egypt, the dinosaur Sue, antarctic dinosaurs, along with various animals, birds, and gems.  We watched the movie (trailer) about Sue.

We then walked next door to the Shedd Aquarium where we toured around a bit and had lunch.  Our favorite exhibits were the Beluga Whales, who were showing off and playing quite a bit), the penguins, sea otter, black & white pacific dolphins, and the sting rays that like to be pet by visitors.

After lunch, we walked a bit further to the Adler Planetarium.  We watched two shows.  One about the Universe and the other about the sky, which included a description of the various constellations.

We grabbed an Uber at the Adler and took it to the Navy Pier.  We walked the length and then came back to ride the ferris wheel.  Brady really enjoyed this and we timed it perfectly because we ended up with virtually no line, and right after we got onboard about 50 people queued up.

After the Ferris Wheel, we went to Bubba Gump’s restaurant.  We enjoyed kibitzing with our server, Daraugh. He was from Ireland and gave us a quiz on the movie.  We did OK on the quiz and Brady got some tough ones right.

We walked back and discovered there was multi-plex cinema in our city block.  So we went and watched Incredibles2.  We enjoyed it and I think it might have been the second time for the boys to see it.

That night we stayed up talking and debating.  Seems like Brady really enjoyed the debate and we discussed how maybe he should consider debate society for high school or college.  He might be really good.  Two YouTube videos I got him to watch during the discussions were:

When I Grow Up (Here is one we discussed.)

After our normal breakfast at the Embassy Suites, we hiked over to the Chicago Institute of Art.  There we toured some new age art along with new media.  But we found the European art exhibit and the Impressionists section.  We got picture by some favorites and then we headed to armor and weapons section.  The museum was huge, but we only had about an hour and half there before we had to leave.

We caught a taxi from the Hilton to the Northwestern University campus visitor center (Segal Visitors Center).  After a 45 minute presentation by admissions counselors for about 200, we broke into smaller groups.  Our tour guide was Becka.  She just graduated with a major in Neurophysiology with minors in Integrated Psychology and Public Health.  She is starting at Northwester medical school in the fall.  We had a good tour that included the Ford Design Center, the Segal Technology center, McCormick engineering, and the Garage.  The Garage is an incubator for student start-ups.  We were most impressed with the multidisciplinary nature of the programs.  All students seemed to design their own areas of concentration and were well-rounded.  We also thought they were pretty humble, given their apparent accomplishments and intelligence.

We finished we Ubered back to the hotel.  After which we hiked back to the Millennium park area to begin our Segway tour.  We received training from team and then a group of 10 of us headed out into the park.  We ended back at the museum campus area.  Brady started out going really slow, but he sped up as we went.  Ultimately, he was the leader of the group and was moving lock-step with the tour guide/instructor.  The boys really seemed to enjoy this activity.  We took some pictures and ended posing with Buckingham Fountain.  It goes up to 150 feet on the hour.

We then picked up a bicycle taxi to the Navy Pier.  We went to the food court area and acquired some fried chicken meals.  We luckily found a table nearby (very crowded).  Afterwards we had got some waffle cones at Baskin Robbins.  It was a long line, but as we went outside and were about halfway into our cones, the Wednesday evening fireworks began.  Brady and Ethan said it was better than local 4th of July fireworks and was just about the right length.  We liked some of the new technology.

We retreated back to the room.  On the way, Brady pranced in a water fountain.  Once back in the room the boys checked in with their folks.

After our standard breakfast at the Embassy Suites, we ubered over to the Museum of Science and Industry.  Our special exhibits were the Zephyr Train, the train board,ToyMaker 3000, the Coal Mine, the U-505 U-boat, 727 cutaway, Tornado Alley movie, Science of Pixar, and the Science of Storms.  It’s always been my favorite museum and it seemed to capture the boys as well.  I would say they enjoyed the U-boat exhibit and tour the most.

We left the museum about 2:45PM to get back to the hotel.  At 5PM we left and planned to subway to the ball field.  The lines were huge so I bought some tickets off of a homeless guy.  We got there with time to spare.  We watched a couple of innings (Cubs were losing when we left, but they ended up winning).  We had dinner at the ballpark and the walked about 1 mile to the theater.

We did the Comedy Sportz improv comedy club.  It was pretty fun.  We sat up front.  Brady was slow to warm to it, but it wasn’t long before he was sumitting ideas to the improvs.  He got teased quite a bit as he kept cheering for the visiting team during the vote (measuring the audience applause).  The team captain kept complaining to me about Brady being a traitor and that we ought to keep him in check.  It was all in fun though.

Our plan was to Uber to the El stop and ride the blue line into the airport.  On the TV we noticed that the blue line was backed up, so we ultimately just grabbed a taxi for the ride to the airport.  Rush hour was bad in a couple of spots, but I only saw one blue line subway.  Our flight was delayed for maintenance, but we were only delayed an hour.  We picked up my brother at the airport and made it to our house by mid-afternoon.

We took the dogs to the dog park and walked around waterfront.  The dogs got lots of exercise, since they hadn’t been in almost a week.  We had dinner at the Bingen Mexican restaurant (Ayutlense).  Brady had his favorite fajitas.  We watched Crimson Tide, as neither Brady nor Ethan remembered seeing a movie with Denzel Washington.  Ethan made it to the end.

We spent a lazy day getting caught up.  I did some Seeq work and worked on this journal and the gallery.  Brady watched Unstoppable, another movie with Denzel Washington.

We met my brother for flying his big dragon kite at the point.  We took the dogs so they could get some exercise.  My brother had never had the kite up as high as he did with Ethan.  Brady got some good flights too.

On the way back we stopped and had some barbecue at the Pine Shed.

We flew back and met Lisa and Jeremy at the airport.