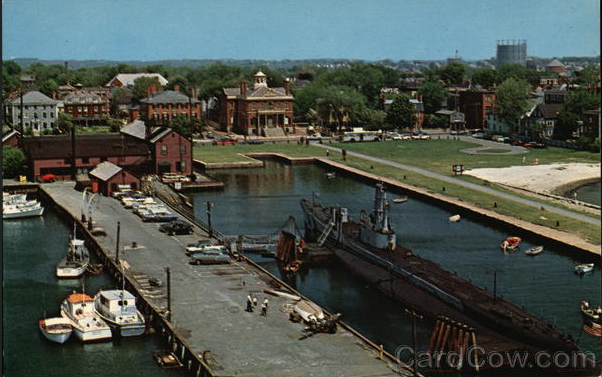 One of the great things I did with my dad is that sometimes he would take me along on his business trips for some father-son bonding and tutoring, twice to Salem MA (he was calling on Sylvania).  I believe the second time was when I was in 6th grade (1967).  We stayed at the Hawthorne Hotel and when he was at work I could tour the area.  Some of my favorite tourist areas included:  House of Seven Gables, what is now called the Peabody Essex Museum, what is now called the Salem Witch Museum.  (Interestingly the PEM has changed course, apparently.  As a young boy I was enthralled by the stuffed-animal collection and model boats.  The PEM is now a world-class art museum with some significant Asian collections.)

The deal I worked with my dad is that as long as I checked in with the front desk every 2 hours or so and kept them informed as to my whereabouts I could go out an explore.

One memorable site was Derby Wharf with the Naval Reserve Training Center on the other side.  It had an old WWII class submarine and I enjoyed just walking out on the wharf and listening to the birds, observing the tide, and mesmerized thinking of what the submarine had done earlier in its career.  My research indicates that the submarine was likely the Sea Dog.

One day my dad had told me to expect him to come to the room at 5:30PM.  I had gotten my gift shopping done and had made my first passes through the various museums and tourist spots over the previous day and that day.  So I decided to just go for a walk.  I told the front desk I was going for a walk and would be back at 5:15PM to wait for my dad.

When I was walking around I ended up at the wharf, as usual, staring at the submarine.  Suddenly some people started to line up at the gate to the little Naval station.  Were they finally opening up to give tours?  I had some money so if they ask for money I was all set.  Without taking time to consider the alternatives or even appreciate the bravery for a 6th grader,  I rushed to the gate and it was apparently a father, mother, and several children in line ahead of me.  I waited patiently while the father had his credentials checked and then they let us all in.  Several of the officers proceeded to give us a tour of the submarine.

About half way through the tour one of the guides told the father that we can let your son up on this bunk, pointing to me.  The father responded, he’s not my son.  At which point the tour guides panicked.  “Who is he?” they asked each other, “Is he your son?”  “Nope.”  “Nope.”  They asked me what the heck I was doing not the submarine.  I told them I saw a line forming and thought the public was invited, but I had money if it was needed.  They laughed and told me to stick close.

Turns out my dad got tickets for a Red Sox game and wanted to pick me up early.  He and his colleague went to the front desk and discovered I was out and about and due back in about an hour.  Wanting not to miss any part of the game, he went out to cruise the streets looking for me.   When he drove by the Naval Station he noticed that the gate was unlocked and a guard was posted.  So he parked and walked up to the gate.

“Is the submarine open?” he asked the guard.  A private tour was being granted to a military family and only those with a government ID were permitted.  My dad told his colleague that his son, had been pretty enamored with the submarine, we should check it out.  Fortunately, my dad had his military ID from when he left the service so they let him in.

Suddenly near the end of the tour I see my dad walking down the center of the submarine.  He found me.

We were both shocked that we hooked up in the middle of the submarine.  Seems like my father really knew his son.