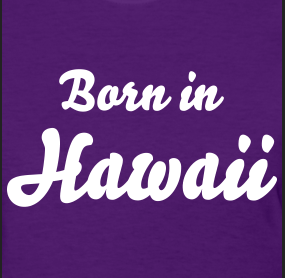 I entered the second grade transferring from Marshall, Michigan to Horseheads, New York.  Broad Street Elementary was a very foreign environment to me with cafeterias, cafeteria ladies, new people, dialects, and new vocabulary.  I had an exceptionally poor first day of school and I didn’t want to cause any more problems.

That afternoon, Mrs. Spangenberg asked each student to take out a piece of paper and write down some answers to questions.  Basically we were filling in data sheets, name, address, etc.  One of the questions was, “Where were you born?”

Turns out I didn’t know.  It never occurred to me to ask and my parents hadn’t mentioned it to me.  However, I was not about to leave this answer blank.  Thanks goodness I could ‘remember’ where I was born by thinking back to my earliest memories.  Or at least I thought I could remember.  My first memories were of Hawaii.  Actually I lived in Hawaii from the time I was about 2 years old until I was just over 4  years old when my dad was stationed there for the Navy. You can pop over to these guys to get access to the best tours.

I wrote down Hawaii.   Mrs. Spangenberg, walked around class and looked at our sheets.  She seemed upset with me since I had written down only a state.  She wanted a city.  I said I wasn’t sure … with a quivering lower lip, afraid of the possible repercussions of getting this wrong.  She asked me, “Honolulu?”  I said, yes, that’s it.  But I didn’t know how to spell it.  So she helped me spell it, I filled in my paperwork, and had successfully deduced that I was born in Honolulu, Hawaii.

Good thing I figured this out as it seemed I was asked about this several times a year and I now had an operational response.

This went on for several years and when I was in 6th grade, my parents noticed some paperwork I brought home from school that said I was born in Honolulu.  They asked me if I thought I was born in Hawaii.  I said, “Yep, that’s correct!”

They informed me that I was actually born in Chicago, Illinois.  I told them they were mistaken, heck I had many forms and paperwork indicating otherwise and had known this for years..

So they brought out my birth certificate to prove me wrong.  I was shocked.  Once I had gotten through the problem in 2nd grade, it never occurred to me I was wrong and to further investigate.

Actually, it’s probably a good thing.  Hawaii didn’t become a state until 1959 and I was born in 1954.  Although it was a U.S. territory, I’d nonetheless hate to create a controversy with my Hawaiin birth certificate. {link to Wikipedia entry on Obama citizenship conspiracy theory}