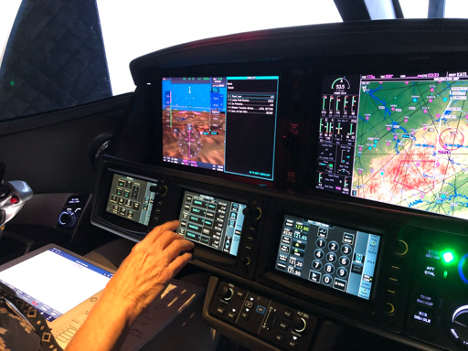 Nancy Sliwa and her husband Steve have ordered a new Cirrus Vision Jet – a single-engine jet that holds 5-7 people. It’s a Cirrus so it has a parachute for the whole airplane and has amazing avionics (the G3000 suite tailored to the Cirrus). So that I could fly with Nancy, I was invited to join in the training. You have to get a type rating for a jet so the training ends with a check ride.

Nancy and I did the full training program since we had not been as instrument proficient as we’d like and all of the training is in IMC. That means we had a 3-day pre-jet training class that talks about what you’ll do for the jet but you fly in an SR22 (either the real airplane or the non-motion simulator). Nancy’s SR22 was there already since Steve had flown it out for his jet training earlier in June so we used that. SR22 doesn’t have the same avionics as the SF50 but it is close with the G1000 and Cirrus interfaces. This was a great IFR refresher. The flight in the sim was useful to get used to sims, and the flight in the airplane was useful to me to learn the Cirrus/Garmin ways.

The pre-jet training included a lot of ground school IFR training: walking though some of the STARs, SIDs, and procedures that we’d need for the check ride. We did a flight each day included maneuvers (steep turns, stalls, and unusual attitudes under the hood) and doing some approaches. Nancy got some anomalies (she got to pull the Cirrus parachute in the sim); I don’t think I got any but I was still learning to fly glass cockpit. I had done 3 G1000 tabletop sim flights at WVFC with some instructors before I came so that helped and had flown with Steve a few times in their SR22 but the G1000 and G3000 are a big step up from the 430 and 650 and S-Tek30 that Zach (my C182) has.

Nancy and I then had the weekend off. It was hot and humid (Tennessee in the summer) so we didn’t do much. I went for a walk one morning; we went up to Smokey Mountain National Park one morning but just had lunch and then walked along a river where people were tubing and rafting. It was warm and started raining so we weren’t there very long but it was lovely.

Steve did his training before us and so we were reasonably prepared for the overall training program and emergencies we’d see. Knowing they are coming doesn’t mean you are ready to respond or could perform the maneuvers! We had been sent all the books (The POH is two volumes of systems and procedures). There are 2 Garmin books about the avionics. Plus a 2-page memory item list of numbers you should know (maneuvering speed, max landing weight, …) and memory items for emergency procedures (cabin pressure loss, engine fire, …) Cirrus has a series of on-line videos walking through the systems, high altitude operations, etc. that we also watched before we arrived. That all helped with the systems stuff but not so much with the flying stuff!

The jet training started with one day of G3000 tabletop training (actually a day and a half since we finished the pre-jet class early). The G3000 has a different interface (3 touch panels) and it’s very easy to have the screens up that you want in the wrong place. Here we did some pseudo-IFR flights as the desktop sims don’t have controls, they really are there to help you learn the interface. One of the challenges is configuring the two displays. You can have each display showing either one or two panes; the usual is to have the Pilots side show the instruments and checklists (or approach charts when it’s time for an approach). And the Co-pilot side has a fixed aircraft status bar (engine performance, pressurization, gear, flaps…) plus one or two panes of data. Usually just one big map, but sometimes a map plus a systems page, a different checklist, whatever. It was easy to think you were commanding one pane but you’d be changing something on another one. Pane (pain) management challenged us throughout the training.

Then we did 4 days of jet ground school. About 6 hours of classroom systems (electrical, fuel, cabin air controls, engine, …) each day plus a flight in a fixed sim for the jet. The fixed sims were very good – all the controls and switches, same seats, and screens outside that generally showed clouds but had good graphics of the airports. We started getting emergencies as well while we practiced IFR flights. My notes are the flights were into some airports where I’ll really never go: ATL, LGA, BOS, DEN…

Over the 3 day 4th of July weekend we were blessed with a visit from Susan Larson. She flew her C182RG out from SAF, stopping for lunch and overnight with friends in Oklahoma. She arrived Friday afternoon (Nancy and I did laundry Friday morning). We visited with her; going back to the National Park and to another park with a lovely lake west of Knoxville, and wandered around downtown Knoxville a bit. Not all that much was open but we did have brunch down there one morning. Susan flew back Monday morning.

The problem with the 3 day holiday was that it broke up our 4-day ground school so we didn’t finish that until Monday. It was a long day since we added an extra hour of ground school to get our high altitude sign-offs as well as going to the hangar to do a real jet preflight.

Monday night we were given our Tuesday flights to plan. And although Steve had warned us, it took forever to plan each flight – and they all were un-doable. Given the conditions they gave us, we were always either overweight, couldn’t make the climb gradient, couldn’t meet speed requirements, runway too short, whatever. So that first night, it took about 2 hours each to plan each flight. Would have been really nice to have had the weekend to do that first planning.

The motion jet sims were amazing to fly. You can feel the acceleration on the runway (it’s definitely a jet!); you can feel the pitch changes when you change the power or put flaps down; you can feel the touchdown when landing (landings in this sim count as real landings). Two 2.5 hour flights each day with anomalies; staggered since there is only one of them at the facility and so Nancy and I had to alternate. One of my flights was 6 am. So between the homework and the flight schedule, and the excitement that really kept me from sleeping much, it was really exhausting. They expect you to be ready to take your checkride after only 5 of these flights. The 4th is a practice check ride; the 5th is a fairly easy flight if you count easy is departing in snow with a 100’ ceiling and still having icing conditions on landing as easy.

We also got a short flight in a real jet out of Knoxville (N223WY). The airplane has not only a stick shaker but a stick pusher. The full-motion sim doesn’t have the stick pusher so you have to experience that in the jet. So we each got a takeoff, an approach, a landing, two-stick pusher events (took me two hands to pull the stick back enough to get it to trigger) and I think I did a maneuver or two as well.

The check ride is an oral exam of all the systems and some of the memory items, a pre-flight on the real jet, and the sim flight which was a summary of most of the stuff we had seen before – and in theory, had executed the desired response or performance (to ATP standards mind you, as is required for a type rating). But here are my notes so you can get a feel for the scope of the training. They did tell us all of this before the check ride so we knew what was coming.

Hand-flown was only from final approach to the runway, you could put the autopilot back on after the missed.

Other emergencies we dealt with in training were

Nancy and Steve both finished on the nominal schedule – passing the check ride after only 5 flights in the motion sim in 3 days. It took me longer – I had to finish or redo part of two flights, plus I literally got sick from not sleeping. So I had 7 flights and took an extra full day. They told me they expect most GA pilots to take longer than 5 flights and they plan for it. Usually, the full-motion sim work is Monday through Wednesday with the check ride Thursday and Friday as a backup. We were a day late due to the holiday so I didn’t finish until Saturday. I had booked my flight to come home Sunday since I expected to take an extra day. It was also nice for Nancy to have a day to recover since Sunday she started her flight home to The Dalles in the SR22 with her brother.

I continue to be astounded that they can train you so quickly to pass this check ride. We met some really amazing pilots; my check pilot was an A10 pilot; Nancy’s prime simulator instructor was an F16 pilot. We also had an F15 pilot for some of our training. My prime instructor came through helicopter flights and instruction. They all were good instructors and very encouraging.

The weirdest thing about the whole trip was being back in the real but not well-protected world. Airplanes, Airports, Hotels, restaurants; even at Cirrus most folks didn’t wear a mask because it was hard to hear with them on in the cockpit (and the instructor was well behind you), or we were eating in the main room. Many people did not wear masks wandering the hotel or in the stores. I am self-quarantining for 2 weeks now in case I picked something up and might be contagious. So far feeling fine.

Our licenses are restricted at this point to only fly with a mentor pilot; Cirrus has a program for that. Even the FAA knows that 6 flights aren’t enough and we need 25 hours more to get our license approved for PIC. And then we need to renew the type rating every year. 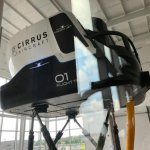 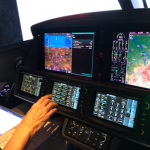 The fixed motion simulator showing the two displays with the 3 touch screens (Nancy working #2) and the autopilot below. Note the gray view out the window – we were always in the clouds! 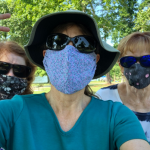 Nancy, me and Susan at Concord Park east of Knoxville. 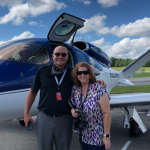 Nancy and Mutt before their flight in N223WY.